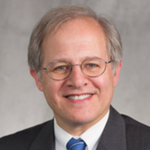 Chapter 15: The Institute for Applied Cancer Science: The Research Model

Dr. Dmitrovsky talks about the model of research set in place at the Institute for Applied Cancer Science [IACS]. He begins by stating the mission of developing multi-disciplinary teams, noting that "the future of science is collaboration" and that discoveries will emerge in the lines between disciplines. He gives the example of genomic medicine. Dr. Dmitrovsky sketches the barriers to moving discoveries to the bedside then talks about the model of IACS research, biotech people and processes are imbedded in research design to speed up discovery and facilitate dissemination via regional care centers and sister institutions.

Yeah. It's really, really great. So as I mentioned before we turned on the recorder, I wanted to maybe have a little bit more of a theoretical discussion today, kind of a 20,000 foot view of what's happening at the institution vis-Ã -vis research. And in part, this was inspired by my conversation with Dr. DePinho last week, and we talked about the Institute for Applied Cancer Science, and how unique that is. So I kind of wanted to get your perspective on the research model that that represents, because it appears to me that that is really where the emphasis is sitting in the institution. You know, that notion of collaboration across many disciplines, coming forward to push forward research, not only within the institution but outside. And then we'll kind of go from there. So how would you characterize that particular model of research, and what it can accomplish?

Well, our purpose here at MD Anderson is to combat cancer in Houston, Texas, the nation, and the world. And that's a pretty tall order. And our way of approaching it is to build interdisciplinary, and I'd say multidisciplinary, teams. The future of science is collaborative. And the more you can bring together experts of different disciplines, different expertise, who are working on a shared problem, the more discoveries that will happen. In fact, many people believe that most discoveries will occur in an unusual area, and that is the area between the expertise of different disciplines, that discoveries will come about through interdisciplinary, multidisciplinary collaboration.

I'm sorry to interrupt you, but can you give me an example of that kind of in-between space that gives rise to discovery?

I think an example of that would be general medicine. The fact that we have the human genome sequenced, and now the cancer genome is being elucidated, and that we can take that knowledge and apply it to having a more effective and efficient therapies that target the very cause of a cancer, that requires experts in genomic medicine, experts in DNA sequencing, experts in big data, and at the same time, experts in clinical trials, people with the content expertise who could take advantage of new knowledge gained. And so here's an example where no single content expert can move forward the discipline of moving discoveries from the bench to the bedside, but it must be done collaboratively. That would be an example. And I think it's a germane example. So at the same time, there's an appreciation that there is a there are inherent barriers to discovery, and sorry, inherent barriers to moving a discovery from the bench into the clinic. Many times, the reward system for faculty members stopped when you produced the visible paper in Cell, Science, and Nature as an example. But actually, MD Anderson has the view that no patient was cured by a Nature, Cell or Science paper. It was the application, the dissemination of that knowledge from the bench to the bedside. And so we are emphasizing the need to accelerate those discoveries Moon Shots program, launched by our president, Ron DePinho, is a good example. But IACS [Institute for Applied Cancer Science], which is the subject you asked me to touch on, is another good example. So IACS is an example of bringing in those with content expertise who typically would reside in a biotechnology or pharmaceutical entity, and have them embedded in an academic enterprise. That facilitates the movement of a discovery from the bench to the bedside that must move through identification of a target, development of a drug that will affect the target, and make that drug amenable to use in clinical trials. It is surprising that oftentimes it takes upwards of 15 years for a basic science discovery to move through the different phases of clinical trials into ultimate FDA approval, and another reality is that once a new standard of care has been put in place, surprisingly, it takes many years, perhaps well over a decade, for that to be incorporated in every community possible. So IACS is one example of how we could reduce the time to develop new drugs that could combat cancer, and perhaps at the same time, take best practices here and disseminate that knowledge broadly into our sister institutions, our regional care system that we have in place, but also our peer institutions in the United States. And so this is an example of what I would call social responsibility, to take this knowledge gained and apply it to benefit the public health. And surely, that's part of our responsibility.