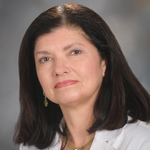 What do you feel women bring to leadership? Do they bring a different style or perspective, in your view?

You know, I definitely feel women—most women have a different style, a different perspective than men leaders. I think there is more of—and my men colleagues will probably get mad at me. (laughs) But I think more thought and caring into decisions. It’s not always like cut and dry. You know, this is generalizations, but we worry more about the consequences. I think we’re probably better planners and organizers. Why? I don’t know. I mean, it’s how to survive for many of us women that have multiple things going on personally and professionally. So you have to multitask, you have to be a good organizer to succeed here or anywhere else, you know. And I think it’s our connection with people. I mean, women generally have better interpersonal skills to connect with people than most men, if you read the literature, and from my own experiences. And so I think that’s additive, and I agree from literature and everything else that teams are much better when they’re integrated with men and women, and if we leave women off, then we’re losing a big resource that, you know, it’s the detriment of the organization.

What do you see, now that there are different generations of men and women in the MD Anderson ranks? I mean, certainly when you arrived, there was still an old guard—

—men and some women of a different generation raised much more traditionally, but we went through the sixties, Feminist Movement, all of that, and all of the changes that organizations had to go through to open up more to women. Do you see a difference with the younger generation?

I think it’s—I don’t know. I have a lot of younger faculty in my department, especially women, and, you know, I think that it’s dependent on a lot of other things, as well as culture. Some were not raised in the U.S., some were, some from different ethnic groups, and I think all of those things factor into what they want as far as their careers and what’s most important. But I think more so family life is like the priority.

Everyone loves their profession, but especially for the women that have children, that they’re juggling, but the priority is making sure their kids are doing well and try to do that so that they can also have a very successful career, whereas I think, you know, maybe thirty years ago, there were very few women in medicine because either they weren’t going to medical school or they were and they were staying home and raising kids, doing just that. Now I think there are more husbands that are more open to helping wives and some of the stay-home husbands, I mean, it’s not that common, but it still happens, whereas I think back in my parents’ generations, that probably never would have happened, never.

And I think we’re all more accepting of kids—you know, the mother not being there all the time, that there’s either a nanny or they go to daycare or there’s other options. That’s much more common, and not that we don’t feel guilty at times from doing that, but it’s not like my parents where my mother stayed home with us and she was there 24/7 and helped us with our homework and was always there when we came home from school. For at least in our department, these women are working and they’re focused on a career, and they love their family and they want to be part of their family, and they want to see their kids grow up, and, you know, they’re doing it, they’re doing both of it.

What’s the effect of that? And I guess what I’m thinking of here is that certainly in the seventies and even in the eighties, the classic thing was, “Oh, you won’t go into a profession. You’re just going to get married and have a family.” So admitting that your family was important to you could be professional suicide in certain context. So I’m wondering now, like [unclear] a few decades, what is the institution—what’s the culture like here for faculty members who make that choice, that family is a priority?

You know, I don’t think it’s like it used to be. I think it’s easier for the men because, you know, they can pop in and out at home much easier, and regardless of what we say, I still think the women have the primary responsibilities at home. I don’t think it means that if you have kids, if you’re a woman on faculty and you have kids, that you won’t be successful because you say, “Look, I have to leave at six o’clock.” And I’ve told my supervisor that before, you know, like early morning meetings, although I don’t think it was appreciated. But one time I brought it up because they wanted a seven-thirty or eight o’clock meeting, and I drop my kids at school, and the earliest you can do it is seven-thirty before—and then by the time I drop them off and get over here, it was a little after eight, you know, with traffic and things. And I said, “Well, you know, I have my kids to drop.”

One of the people sitting around the table—because at that time I was the only woman chair—goes, “Well, can’t you just delegate that to somebody else, you know? Why do you have to do it?”

I said, “Well, it’s my kids. That’s my choice to drop them off in the morning at school.” But, you know, they have wives to drop them off. That doesn’t affect them. So if they want to be here at six o’clock at the morning, they can. And, you know, you don’t see your kids all day, and it’s simply, “Can we move the meeting till fifteen minutes?” which they refused.

And even now, I’ve had my supervisor make comments, “Oh, you can’t get Carmen here early to come to a meeting.” He made a comment to Liz Travis, because one day there was something early, it was a woman’s thing, and I agreed to do it. So I had to make a lot of changes at home so my husband could drop off my kid, because our kids go to different schools. So it’s hard when we—I take one group, he takes the other, my son. But when one of us is not there, we have to do both, so I have to make sure it’s okay with him because he’s got to do it a little earlier.

And so it was important to me. I think we were going to talk at school or do something for women, and he saw us there. And later he made a comment to Liz in the elevator, “Oh, I don’t know what you did to get Carmen here that early.” And, you know, it was important for me, but it’s not like I can be here early all the time, because then, you know, I can’t—I feel it’s important for me to drop my kids off and wish them a good day before I come in.

But I still think that that was not seen as a very good thing for me, because I wasn’t as flexible as being here when they wanted to start their meeting, so I was always late, or I try to get home for six, so that means, you know, I have to leave here around five-fifteen or five-twenty, because my housekeeper’s got to leave, and I know my kids are starting homework or should have started. And, you know, it’s important for me to be there for a few hours when they were younger—my youngest one still goes to bed at eight-thirty—you know, that you have a few hours with them before it’s time to put them to bed.

But so I can’t do late meetings, you know, six o’clock or five-thirty, because I really want to spend a few hours with my kids before, and I think that that’s not always seen as, “Well, you know, she’s just not flexible. She can’t do early meetings. She can’t do late meetings.” And that wasn’t probably a good thing for me. But on the other hand, I feel that I made the right choice. I’m here, I work very hard when I’m here, I’m a good multitasker and organizer, and I make the most of the nine, ten hours I’m here a day with what I have to do, and, you know, I get my stuff done. So I don’t think there should be issues about why can’t I be here for a seven o’clock meeting on a regular basis.

And I think all of us in certain situations have had that. I think it’s more acceptable now, because even the younger generations are pushing back, even younger than I am now are more pushing back and saying, “Hey, I have a life outside of my job.” You know, this is not a nine-to-five job, we all recognize that, and we do what we have to do, but on the other hand, we want some control of the hours so that we can make a difference in our kids’—in our family’s life as well, because, you know, this place will continue to go on long after we retire or leave, and this place won’t be here when we’re old and need someone around us. Our families will, but this place won’t. So, you know, I love my work, I like what I do, but I’m not married to the building or to the institution, and one day—you know, I guess I don’t want to sit here and die in my office at old age because I don’t have any other life, you know.