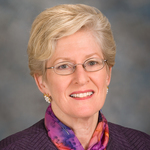 Now, in 1996 through 1997 you were part of ELAM or the Executive Leadership in Medicine Program. In fact, you were the only person from Texas selected to participate in that program that year and you had mentioned—I can’t remember if it was in your interview or in your autobiographical essay for Legends and Legacies that that was really a critical experience for you, and I wonder if you would talk a bit about what that was, what that offered you.

Well, it was a new program that had started the previous year, and the year that it was announced it was too soon for me to go. I couldn’t organize things to get to go the first year, and so I asked permission to go to this program and I was really at a position—I had already told Dr. Becker that I would be stepping down as department chair after 15 years, and my feeling was I’m not learning anything else. This is not a learning experience for me anymore. Someone needs to come in and really take the department in a different, broader direction that has more relevance to the human cancer issue, and I’m either going to go back to the laboratory and continue my research, or I’m going to do more administration. By then I was really interested in the science of administration and in leadership issues in general from a didactic point of view, and so when this course became available I thought that would be a good thing for me to see whether I’m really—which way should I be going here, and it was interesting. There was a woman in my class my same year who was also an immunologist, and I ended up going the administration route, and she ended up staying in the laboratory. But it was a time—it was a year’s program—we went for a week or 10 days or something in the fall, and we went to the American Association of Medical Colleges meeting in the winter, and then we had another week in the spring, and then we had assignments during the year in addition to that.

And this program was just for women.

It is just for women, and it’s for women in academic medicine, and the entire focus of that program is to increase the numbers of women in leadership positions in academic medicine. And so it was an extremely formative experience for me. It was an eye opener for me. I learned things about leadership and administration that I had no idea about, and it was incredibly valuable in terms of teaching me how to lead people who have different styles than I do. It helped define what is my own style, what are the principles on which you are going to lead, and just really crystallizing a lot of those issues for me. It was also extremely energizing to be in a room full of very talented, very bright, very high-powered women, which is something that had been totally beyond my experience before. You’re in a room full of women, and you don’t have to be the one who organizes and does everything. There are other people who will also help out. But it was a phenomenally exciting time, and I really met wonderful people, and it really gave me the opportunity to reflect on where I wanted to go with my career. One of the most valuable things that they did in that course, which they are still doing now after 10, 11, 12 years, is one of the intersession assignments is to interview people in your institution, the head of development, the head of finance and administration, the head of personnel, people that you don’t normally have contact with. I learned so much from that exercise about how the institution worked and what was important to people and what they were trying to accomplish in their jobs. It was really an incredible exercise. It also was amazing that they were so thrilled that somebody wanted to know what they did, also a revelation that some faculty member was interested in what they did, which was very telling. At the end of it I decided I really did want to do administration and that I was not going to—I felt for many reasons that my major contributions had been made scientifically. I always say that if I were married to anybody but Josh I probably wouldn’t feel like that, but every time I think he’s done his important work he comes out with something else. I thought, no, I’ve done my thing, and I was really interested in learning other things and moving on to something where I was kind of growing professionally, and so that was the choice. And it happened that that is when Dr. Mendelsohn came to the institution, and so that provided the opportunity because there were many changes in the administration and the structure at the time that he came, and so he gave me the opportunity to participate.