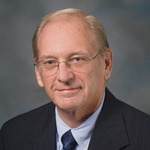 Mr. Daigneau explains that the new Faculty Center is located on a site of a privately owned parking lot. Mr. Daigneau tells a story about threatening to use MD Anderson's power of eminent domain in order to bring the developer that owned the lot to come to the negotiating table. Mr. Daigneau next explains that he used the design-build system to construct the Faculty Center: this was the first time the system had been used by the UT system for any complex building. The Faculty Center was completed in record time, fourteen months for thirty-five million dollars. Moving the faculty offices out of the clinic buildings allowed them see more patients, earning enough money to renovate existing buildings. Mr. Daigneau next talks about backfill and redevelopment projects totaling nearly 100 million dollars. He describes the changes required in the Alkek Hospital and LeMaistre Clinics. Speaking about the Faculty Center, Mr. Daigneau notes that he was able to get the administration to promise that if he would complete the building in the short time frame for the 35 million cost, if it was never used for clinical purposes. To construct the Faculty Center, he studied office tower buildings. At the same time, Mr. Daigneau explains, MD Anderson was looking to expand clinical services. He describes the Houston Main Building (also called The Prudential Building) the institution had acquired in the seventies, a twenty-acre property located at the corner of Fannin Street and Holcombe Boulevard. He and Kevin Wardell (to whom he reported) decided to locate the ambulatory clinic at this site: a 250,000 square foot clinic to be constructed in 36 months. Mr. Daigneau explains how the project was eventually expanded to 6000,000+ square feet, though there was no clear determination of who would occupy the building. Mr. Daigneau next describes the hurdles overcome to insure a rapid building process for the Ambulatory Clinic: creation of the site master plan (to include 4 buildings); sorting out transportation and traffic circulation issues within and around the site 'a process that involved negotiations with the Texas Medical Center to construct new roadways. He notes that building went ahead though the occupants had not yet been determined, despite discussions that involved all section heads: Dr. David Callendar eventually decided who would occupy the building. Mr. Daigneau explains that the design-build process was used 'a controversial move on such a complex building and the largest ever constructed in the Texas Medical Center. Mr. Daigneau explains the construction approach used by adopting a mall-type strategy of determining anchors. He describes the unique features of the Mays Clinic, decisions made that were critical for the future, some political issues that had to be resolved. He describes the radiation oncology suites that had windows for the first time (instead of being sunk in the ground) and the way circulation was planned to help with wayfinding. Next, Mr. Daigneau explains how Dr. Callendar found two volunteers to occupy the site and also outlines why the Mays Clinic is one of the best-planned, comprehensive facilities from the perspective of patient experiences.