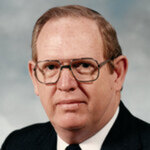 In this chapter, Dr. Bowen talks about how the National Cancer Institute impacted research at MD Anderson, the emerging field of viral oncology, and how he made time to work directly with patients. He also discusses the development of the Department of Virology at MD Anderson.

Because of the pressure of science that was coming in from all over the world, the National Cancer Institute decided to mount an enormous, largely contract-based coordinated research effort nationwide and even worldwide, to try to establish once and for all, the viral etiology of animal and human disease. And so was begun an initiative from NCI, but scattered through institutions in this country and abroad called the Special Virus Cancer Program. Dr. Dmochowski was one of the recipients of a very large set of contracts. There were three different contracts at one time. Two of them virologically-based, one largely to continue electron microscopy, one to develop new techniques of cellular and molecular biology to bring to bear on the problem, and then another one dealing with a curious new set of organisms called mycoplasma. The mycoplasma program did not last very long because pretty soon, mycoplasma were more or less discounted as having an association with cancer. But there were lots of other things to be done and many viruses to be studied. And lots of studies to be carried out. And as a result of that expansion, and under some political pressure from Dr. Dmochowski, Dr. Clark agreed to remove and enlarge the Section of Virology and Electron Microscopy from the Department of Biology and created a department of virology, the first such department anywhere in the University of Texas system. Now, there was already a department of virology at Baylor just across the street operated by Dr. Melnick. And Dr. Melnick and Dr. Dmochowski were competitors and friendly rivals and mutual critics for all the years of their lives. And I use the word "friendly" somewhat generously. It was not always friendly, but it was always competitive. But, when the need for cooperation came down, they were always there to cooperate because they understood that virology was important and that virology had a role to play. Dr. Melnick's work was crucial in the advances against polio. Dr. Dmochowski's had been seminal in establishing an international effort to determine whether or not viruses were associated with human cancer, and what to do about that if it turned out to be true. And so, there grew in Houston at the time one of the largest and most influential virological presences that existed in any academic arena in the country. And there was also a tremendous coordinate effort in the nation among this new breed of virologists who called themselves viral oncologists; that is, virologists who studied cancer. It was a tremendous time. I never worked so hard or had so much fun in my life! But, at the same time, it was my own personal natural bent to want to have a larger role in M. D. Anderson, too. For one thing, our laboratories were in leased space in the building one block away from M. D. Anderson. That was a problem for me. I liked to be there every day, and I had colleagues who said, "Well, you know, you are a frustrated physician and if you had a brain in your head, you would quit today and apply for medical school and go to medical school and come back and do the thing that you dream of doing, namely, working with patients." And there was a little bit of tension within myself for much of my career and in guiding some of the things that I did organizationally at M. D. Anderson.

Did you ever have any contact with patients in the role that you described?

Certainly not in a treatment role, but I got to know many of the patients who participated in our research programs. And when we were working on studies and taking notes, I very often went to be with the patients. Dr. Clark always wanted a patient to clearly understand if he or she were involved in some sort of science. And if the science was, in fact, designed to help them and certainly not to hurt them, and not to compromise their treatment in any way. And Dr. Clark wanted everyone who was involved in a project acknowledged and known. But I probably spent more time with patients than I needed to, simply because I enjoyed that aspect of it.