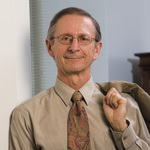 Chapter 04: Joining the Department of Tumor Biology at MD Anderson

Chapter 07: Academic Affairs: Administrative Structure and the Role of the Vice President

Chapter 08: An Ability to Work With and Within Structure

This work is licensed under a Creative Commons Attribution-NonCommercial 4.0 International License

Dr. Stephen Paul Tomasovic (b. 1947, Bend, Oregon) joined the Department of Tumor Biology at MD Anderson in 1980. He decided to switch his career focus from research to administration and had an impact on educational initiatives and faculty leadership at the institution. Dr. Tomasovic founded and served as the first Director of the Cancer Biology Program. He served Vice President roles for Educational Programs and Extramural Programs (now Global Academic Programs). He served as Senior Vice President for Academic Affairs from 2006 until his retirement in 2011.

This interview of Dr. Stephen Paul Tomasovic (b. 1947, Bend, Oregon) is conducted in 3 sessions. The first two take place on 1 August 2011. The site is Dr. Tomasovic’s office in the Pickens Academic Tower at Houston’s University of Texas MD Anderson Cancer Center. A follow-up session on 11 November 2011 is conducted after Dr. Tomasovic’s retirement to a 20% position: the location is the Provost’s Office in Pickens Tower. Dr. Tomasovic served as the Senior Vice President for Academic Affairs. He joined MD Anderson in 1980 with a research career in mind. He has a B.S. in Zoology 1969 and an M.S in Radiation Biology, Biological Oceanography and Zoology in 1973 from Oregon State University, Corvallis to a Ph.D. in Radiation Biology and Cell and Molecular Biology, Colorado State University, Fort Collins, 1977. However, his career soon veered into administration. Dr. Tomasovic has been a leader and participant in numerous institutional change processes. In nearly five hours of interview time, he offers a leader’s perspective on MD Anderson’s structure and its evolution processes. Dr. Tomasovic has deep knowledge of the workings and challenges of institutional culture. He is also a very candid interview subject, who engages easily in self-reflection. Tacey A. Rosolowski, Ph.D. is the interviewer.

The first session (1:54) opens with Dr. Tomasovic’s overview of the Historical Resources Center –which he founded-- and the Making Cancer History Voices Oral History Project that it oversees. He then turns to his early educational background. Drafted as a college senior, his service in Military Intelligence during the Vietnam War not only gave him focus for his later graduate studies, but also strengthened specific characteristics and skills that would eventually suit him to a career in administration. Dr. Tomasovic was hired in 1980 as an Assistant Professor in the Department of Tumor Biology (now Molecular and Cellular Biology) during the time when Dr. Charles LeMaistre and Dr. Frederick Becker were bolstering the basic sciences. He re-evaluated his career, however. In the next half hour, he describes his first “forays into leadership”: e.g. during 1986-’88 he created and directed the multi-disciplinary Program in Cancer Biology (first called Interdisciplinary Studies in Cancer Biology) in the Graduate School in Biomedical Sciences. This work presages his long-term particular emphasis on the educational culture of MD Anderson, and Dr. Tomasovic talks about how interdisciplinary work –at MD Anderson and in general-- is crucial to treating cancer and fostering creativity in research.

During the last forty minutes of the session, Dr. Tomasovic gives an overview of his responsibilities as Senior Vice President of Academic Affairs. He reflects on his leadership style and how this has facilitated his effectiveness. He notes how he came to the attention of James Bowen, then Vice President for Academic Affairs, who worked with him in creating the Faculty Senate (Dr. Tomasovic was the first Chair, ’91-93), and who appointed him Assistant to the Vice President for Academic Affairs (1994). The session closes with a sketch of the institutional flux in play during 1998 when Dr. Mendelsohn assumed leadership of MD Anderson.