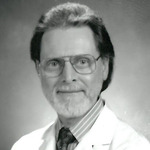 Chapter 01: A Pathway to Pathology With Inspiring Mentors

Chapter 02: A Pathologist Discovers His "Eye"; An Introduction to Judah Folkmann

Chapter 03: An Introduction to R. Lee Clark and MD Anderson

Chapter 05: Memories of MD Anderson and the Texas in the Seventies

Molecular pathologist Frederick F. Becker (b. 1931, New York, NY) was recruited to MD Anderson in 1976 to chair the Department of Pathology. He quickly made a research impact with his discovery of epigenetic changes during pre-malignancy and in malignant tumors. His work has also focused on treatments (e.g. TX-262 and pancreatic tumor cells) and techniques for isolating circulating tumor cells using dielectrophoresis. Dr. Becker had a deep impact on MD Anderson’s multi-disciplinary and translational approach to research through his service as MD Anderson’s first Vice President of Research, a role he served from 1979 until his retirement in 1998.

Submitted by: Tacey A. Rosolowski, Ph.D.

Molecular pathologist Dr. Frederick F. Becker (b. 1931, New York, NY) is interviewed in this two-session interview (3 hours 40 minutes). Dr. Becker was recruited to MD Anderson in 1976 to chair the Department of Pathology: in 1979 he was appointed Vice President of Research and served in that role until his retirement in 1998. He held the Hubert L. And Olive Stringer Distinguished Chair in Basic Science for many years. These sessions, conducted by Tacey A. Rosolowski, follow up on a 2001 interview. The sessions take place in Dr. Becker’s office in Research Park, on the South Campus of MD Anderson.

Dr. Becker received his B.A. from Columbia College in New York in 1952 and went on to receive his M.D from the New York University School of Medicine in 1956. He went to the Harvard Medical Service, Boston, Massachusetts, for his internship in Medicine (1956-57), then returned to New York to take up his roles a Resident-Fellow in Pathology and Cell Biology at NYU and Bellevue Hospital. From 1960 to ’62, Dr. Becker served at the Naval Medical Research Institute at Bethesda, Maryland. In 1962 he returned to New York to take up a position as an Assistant Professor of Pathology (tenured ’66) at the New York University School of Medicine. When he was recruited to MD Anderson, he was a Professor of Pathology and Director of the Department of Pathology at Bellevue Medical Center.

Dr. Becker’s early research focused on the mechanisms of carcinogenesis then evolved into microfluidics and dielectrophoresis, areas of study that enabled him to develop a method for separating circulating tumor cells and characterize genes and gene products. In his administrative role as Vice President of Research, Dr. Becker was responsible for expanding the research faculty at MD Anderson, working to develop facilities and criteria for excellence that would ensure the institution’s growing prestige. He received the Charles A. LeMaistre, M.D. Outstanding Achievement Award in Cancer (1996), the first Presidents’ Award (1998), and the Distinguished Service Award (2001) in recognition of his contributions to research excellence. In 2012 the American Society for Investigative Pathology awarded him the Gold-Headed Can Award in recognition of long term contributions to pathology and excellence in research, teaching, and leadership in medicine.

In this interview, Dr. Becker speaks at length about his roles in developing the Department of Pathology and his efforts to strengthen research at MD Anderson. He also discusses his research. He offers insights into the transformation of the institution from a “mom and pop” scale (his term) to a large corporate entity.